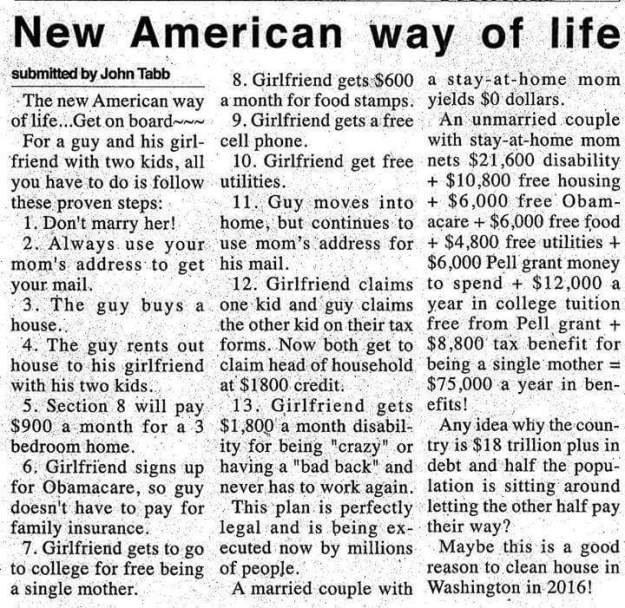 Very hard to ignore, especially for those who have been directly impacted by the decisions the government has made. In fact, before most people were aware or even noticed the political nose dive, I wrote in 2008 an article called A Citizen’s Right in New Times, a small local newspaper in Florida on the potentiality of the “overuse” of subsidiaries, regardless of one’s qualifications or not. I have also written my opinion and my first personal experience.

I’m not going to go as far as I prophesied it (although the title of prophet sounds darn cool), but rather I observed the patterns of political power. Not much change within it after centuries, except the religious aspect that our Four Fathers would be turning over in their graves about.

Believe it or not, I know of a few people that have told me they have used these clever tactics to find that loophole in the system.

How can the government allow this? When I was only making $4K a year and going to college full-time I couldn’t even get food stamps. Although not much income, I was still holding down a job to show my dedication to work towards the “American Dream” as a responsible U.S. citizen. I heard different excuses for why I was denied food stamps: I “chose” to attend college full-time; I’m a single Caucasian without children; and I made too much income (say what? I was 200% under poverty level!). I was told by them to quit college; find a better paying job (during the recession); and my favorite, “just get knocked up if you want all that”. Wow, really?

At one point while on the phone with a food stamp representative, I became very irritated yet hopelessly lost in my own transition. I couldn’t be passive any longer. I said “so let me get this straight. You are telling me if I have 5 babies from 5 different baby daddies and I’m in no relationship with any of them . . . in fact, never have, that I’d get food stamps, cash assistance and a full grant to college?” I continued. “I believe in helping people get financially and emotionally stable enough, but not to provide these resources as a crutch if they can’t maintain responsibility. Also, how does this have anything to do with me? How come I’m putting in the work and cannot be considered? I thought the government cared about our education, putting money into it, yet how do you suppose I continue my education and work being malnourished unable to provide food for myself? How is that going to work?”

Those who take the time to educate themselves on the government’s loopholes are corrupt Americans or sneaky immigrants. They know how to make money or not exist to the system in order to beat it. Or is it the other way around? Where the government is creating this new kind of human breed to be submissive to the loyal dollar in order to suppress chaos and civilian uprising for America’s future?

Henry Adam said it best in his print The Education of Henry Adams. It was written throughout most of his adult life between the Civil War and World War I. He quoted “chaos often breeds life when order breeds habit.”

Your thoughts matter. Do you have a personal experience with this? Please share!